Marijuana refers to the dried leaves, flowers, stems, and seeds from the Cannabis sativa or Cannabis indica plant. The plant contains the mind-altering chemical THC and other similar compounds. Extracts can also be made from the cannabis plant

Marijuana is the most commonly used addictive drug after tobacco and alcohol.1 Its use is widespread among young people. In 2018, more than 11.8 million young adults used marijuana in the past year.1 According to the Monitoring the Future survey, rates of past year marijuana use among middle and high school students have remained steady, but the number of teens in 8th and 10th grades who say they use it daily has increased. With the growing popularity of vaping devices, teens have started vaping THC (the ingredient in marijuana that produces the high), with nearly 4% of 12th graders saying they vape THC daily. In addition, the number of young people who believe regular marijuana use is risky is decreasing.2 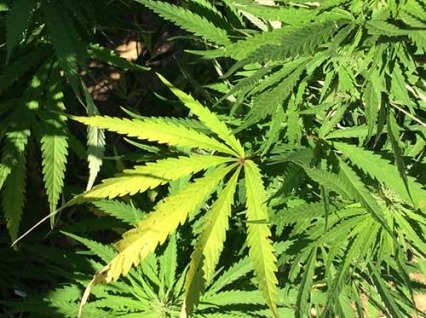 How do people use marijuana?

People smoke marijuana in hand-rolled cigarettes (joints) or in pipes or water pipes (bongs). They also smoke it in blunts—emptied cigars that have been partly or completely refilled with marijuana. To avoid inhaling smoke, some people are using vaporizers. These devices pull the active ingredients (including THC) from the marijuana and collect their vapor in a storage unit. A person then inhales the vapor, not the smoke. Some vaporizers use a liquid marijuana extract.

People can mix marijuana in food (edibles), such as brownies, cookies, or candy, or brew it as a tea. A newly popular method of use is smoking or eating different forms of THC-rich resins

Smoking THC-rich resins extracted from the marijuana plant is on the rise. People call this practice dabbing. These extracts come in various forms, such as:

These extracts can deliver extremely large amounts of THC to the body, and their use has sent some people to the emergency room. Another danger is in preparing these extracts, which usually involves butane (lighter fluid). A number of people have caused fires and explosions and have been seriously burned from using butane to make extracts at home.

How does marijuana affect the brain?

Marijuana has both short-and long-term effects on the brain.

When a person smokes marijuana, THC quickly passes from the lungs into the bloodstream. The blood carries the chemical to the brain and other organs throughout the body. The body absorbs THC more slowly when the person eats or drinks it. In that case, they generally feel the effects after 30 minutes to 1 hour.

Marijuana over activates parts of the brain that contain the highest number of these receptors. This causes the “high” that people feel. Other effects include:

Marijuana also affects brain development. When people begin using marijuana as teenagers, the drug may impair thinking, memory, and learning functions and affect how the brain builds connections between the areas necessary for these functions. Researchers are still studying how long marijuana’s effects last and whether some changes may be permanent.

In another recent study on twins, those who used marijuana showed a significant decline in general knowledge and in verbal ability (equivalent to 4 IQ points) between the preteen years and early adulthood, but no predictable difference was found between twins when one used marijuana and the other didn’t. This suggests that the IQ decline in marijuana users may be caused by something other than marijuana, such as shared familial factors (e.g., genetics, family environment).6 NIDA’s Adolescent Brain Cognitive Development (ABCD) study, a major longitudinal study, is tracking a large sample of young Americans from late childhood to early adulthood to help clarify how and to what extent marijuana and other substances, alone and in combination, affect adolescent brain development.

A Rise in Marijuana’s THC Levels

The amount of THC in marijuana has been increasing steadily over the past few decades.7 For a person who’s new to marijuana use, this may mean exposure to higher THC levels with a greater chance of a harmful reaction. Higher THC levels may explain the rise in emergency room visits involving marijuana use.

The popularity of edibles also increases the chance of harmful reactions. Edibles take longer to digest and produce a high. Therefore, people may consume more to feel the effects faster, leading to dangerous results.

Higher THC levels may also mean a greater risk for addiction if people are regularly exposing themselves to high doses.

What are the other health effects of marijuana?

Marijuana use may have a wide range of effects, both physical and mental.

Long-term marijuana use has been linked to mental illness in some people, such as:

Marijuana use has also been linked to other mental health problems, such as depression, anxiety, and suicidal thoughts among teens. However, study findings have been mixed.

Are there effects of inhaling secondhand marijuana smoke?

While it’s possible to fail a drug test after inhaling secondhand marijuana smoke, it’s unlikely. Studies show that very little THC is released in the air when a person exhales. Research findings suggest that, unless people are in an enclosed room, breathing in lots of smoke for hours at close range, they aren’t likely to fail a drug test.15,16 Even if some THC was found in the blood, it wouldn’t be enough to fail a test.

Getting High from Passive Exposure?

Similarly, it’s unlikely that secondhand marijuana smoke would give nonsmoking people in a confined space a high from passive exposure. Studies have shown that people who don’t use marijuana report only mild effects of the drug from a nearby smoker, under extreme conditions (breathing in lots of marijuana smoke for hours in an enclosed room).17

How Does Marijuana Affect a Person’s Life?

Compared to those who don’t use marijuana, those who frequently use large amounts report the following:

People also report less academic and career success. For example, marijuana use is linked to a higher likelihood of dropping out of school.18 It’s also linked to more job absences, accidents, and injuries.19

Is marijuana a gateway drug?

Use of alcohol, tobacco, and marijuana are likely to come before use of other drugs.21,22 Animal studies have shown that early exposure to addictive substances, including THC, may change how the brain responds to other drugs. For example, when rodents are repeatedly exposed to THC when they’re young, they later show an enhanced response to other addictive substances—such as morphine or nicotine—in the areas of the brain that control reward, and they’re more likely to show addiction-like behaviors.23,24

Although these findings support the idea of marijuana as a “gateway drug,” the majority of people who use marijuana don’t go on to use other “harder” drugs. It’s also important to note that other factors besides biological mechanisms, such as a person’s social environment, are also critical in a person’s risk for drug use and addiction.

Can a person overdose on marijuana?

An overdose occurs when a person uses enough of the drug to produce life-threatening symptoms or death. There are no reports of teens or adults dying from marijuana alone. However, some people who use marijuana can feel some very uncomfortable side effects, especially when using marijuana products with high THC levels. People have reported symptoms such as anxiety and paranoia, and in rare cases, an extreme psychotic reaction (which can include delusions and hallucinations) that can lead them to seek treatment in an emergency room.

While a psychotic reaction can occur following any method of use, emergency room responders have seen an increasing number of cases involving marijuana edibles. Some people (especially preteens and teens) who know very little about edibles don’t realize that it takes longer for the body to feel marijuana’s effects when eaten rather than smoked. So they consume more of the edible, trying to get high faster or thinking they haven’t taken enough. In addition, some babies and toddlers have been seriously ill after ingesting marijuana or marijuana edibles left around the house.

Many people who use marijuana long term and are trying to quit report mild withdrawal symptoms that make quitting difficult. These include:

What treatments are available for marijuana use disorder?

No medications are currently available to treat marijuana use disorder, but behavioral support has been shown to be effective. Examples include therapy and motivational incentives (providing rewards to patients who remain drug-free). Continuing research may lead to new medications that help ease withdrawal symptoms, block the effects of marijuana, and prevent relapse.